Hoboken is a small town on the banks of the Hudson River in the northwestern state of New Jersey.

Once known as the home of baseball and the place where Frank Sinatra was born, today Hoboken is a party city with many bars and clubs. There are also many young professionals working across the river in New York.

Newark Liberty International Airport is the closest airport in New York City. To get from there to the center of Hoboken, take any train to New York and take the train to the Hoboken Terminal at the Sekokus station. During peak hours, some trains go directly to Hoboken from the Newark airport station.

It is a high-speed tram system that connects Hoboken to Wihawken, Jersey City and Bayonne.

Walk! Finding a parking lot in Hoboken is not easy. You can usually park at the Sinatra Drive near the Hudson River or on any of the streets named after the presidents (except Washington). The city's indoor parking lot on Hudson Street and elsewhere is a good option if you don't want to get a "tower" for parking violations. Parking at such parking can cost 3-5 dollars per hour and significantly increases if you leave the car for the night. Some of the car parks are available only for the residents of Hoboken, or are available for purchase of a monthly pass, so read the signs carefully or check with the car park workers.

If you really need to park, read the street signs carefully. Make sure you can park here before leaving your car. On most streets, one side is reserved for locals, which can be read on green white-text signs. In order to leave the car on this side of the street (marked as Resident Only - for residents only), a special permit is required. Please note that there are also street cleaning restrictions and a 4 hour parking limit for those who do not live in the city permanently. After this time you need to move the machine.

It's so hard to find a parking lot in Hoboken that parking lots can sell for $40,000. 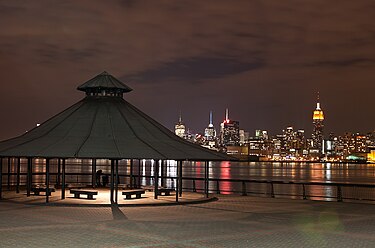 View of Middle Manhattan from Frank Sinatra Park. The magnificent view of Manhattan is one of the reasons to visit Hoboken.

Thanks to a wide variety of pre-war buildings with excellent architecture and no industrial facilities, Hoboken is a great place to walk

To the north of the historic Hobokenka terminal, which houses the NJ Railway and PATH railway stations, lies Piers A, with a magnificent view of New York from its tip. On a clear day you can enjoy panoramic views of the city, stretching from the George Washington Bridge to the Verrazano Bridge. During the summer months, at 4-5pm, you can see huge cruise liners going to Bermuda or Canada. If you get up early (or go to bed late), you can see the unforgettable silhouette of New York at dawn from Pierce A. From here, you can also see the "Sacrifice in the Light" installation, which lights up every year in memory of the victims of the September 11 attacks. To the north of Pirce A to the 15th Street on the promenade there are many parks.

Join the celebrations. During the holidays, the city was flooded with people. The largest crowds gather on New Year's Day and on July 4th. People usually gather in numerous bars as well as on the seafront, where you can see fireworks. It is launched in New York, but it is best seen from Hoboken, especially from the already mentioned Pierce A. Another holiday widely celebrated in Hoboken is St. Patrick's Day. Each year, a parade takes place in the city, gathering a huge number of people flooding the main streets and bars.

Castle Point on the Hudson Coast also offers magnificent views of New York City. However, this place is located on the territory of Stevens Polytechnic, so be ready to meet with the security service, even if you just enjoy the view. Frank Sinatra's birthplace is on Monroe Street (about 4th Street).

If you're a baseball fan, visit the place where the first baseball game was played, marked with a sign at the crossroads of 11th Street and Washington Street, next to the Helmers restaurant.

Finally, Marlon Brando's film "In Port" was shot in Hoboken. Shooting took place in parks at the intersection of the 4th and 11th streets with the Hudson Waterfront, and these places can be found today.

Walk along Washington Street, where there are many shops and restaurants. Come to Maxwell’s, it is a beautiful bar-restaurant and a concert venue. Get to the small music store Tunes. Walk/run/roll along the Hudson. Visit the park at Pearce A (the crossroads of 1st Street and Sinatra Drive) to enjoy the magnificent view of Manhattan. A small part of the park is dedicated to the people of Hoboken who were killed in the September 11, 2001, terrorist attacks. If you are skating or skating, there is a small skate park on the Hudson coast with stunning views of Manhattan (approximately 1.5 km north of the PATH station).

Sometimes Hoboken is rightly called the "Bar City": There are more alcohol-selling establishments per inhabitant than anywhere else in New Jersey. A large number of bars are located in a rather small area.

Please note that many restaurants in Hoboken do not have a license to sell alcohol, so they are allowed to bring their wine and beer. This can save you a round amount, considering that in alcoholic stores a bottle of good wine can be bought for only 10 dollars

If you want to look at old Hoboken, people in helmets, hear Aerosmite from a musical vending machine and have a cheap spill beer, go to Wilton House on 1st Street, a couple blocks from PATH Station.

Dozens of bars with a wide range of alcohol can be found within walking distance of the PATH station. There are bars for all tastes, including gracious places.

A happy watch in many institutions in Hoboken helps to save a lot of money. In such a case you need to come to the bar before 7 or 8 pm.

It is surprising that in Hoboken there is only one hotel, opened in 2009, and it is quite expensive (from 209 dollars per night). A few cheap hotels can be found north of the city, at the entrance to the Lincoln Tunnel. The best hotels (Hyatt, Courtyard, etc.) are located south of Hoboken in Jersey City.

You can get to New York by bus number 126, by the PATH metro or by car through the Dutch tunnel and Lincoln tunnel. Trains from Hoboken Terminal leave for almost any point in New Jersey, as well as to Newark Station, where you can catch the Amtrak train to Newark Airport.